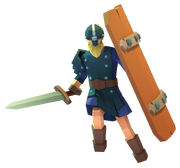 Elderfall was built on the bulwark shoulders of the Warriors of the Great Southern Hills ~ these legendary fighters have forged themselves over generations into the strongest and most disciplined melee experts.

The Warrior specializes in melee attacks and has no ranged attacks or abilities.

The masteries for the Warrior are Golem Warrior and Immortal Warrior.


The Warrior is a close range beast, capable of absorbing and dealing immense damage. The Warrior is countered by the Berserker. The key to defeating a Berserker is timing, avoiding slam attacks with a dodge and blocking melee attacks with the shield. Because of the Berserker's versatility it is one of the most difficult classes to counter, making the job of a Warrior difficult.

A Warrior as it performs its Shield Rush.

Increase stamina recharge rate for a short time from kills

All shield abilities inflict more knockback and damage on enemies

Increase max health at the cost of reduced movement and stamina

Slowly regen health if standing still and blocking, while not being attacked

Increase first strike damage of melee attacks after a kill

Absorb and stack blocked damage then reflect back to foes on using shield rush The shield rush does a basic 25 damage on average. With 15 extra damage being added per stack. Absorbs up to 5 stacks.

-when in combat jump and swing like crazy the reason for jumping is to dodge hits while attacking at the same time (note does not always work) .

-so the perks on warrior are major so use as many perks as possible like, meditate, ruthless and strength.

- watch out for long range fights those are very dangerous, so you might need to 1st hide 2nd sneak towards your opponent 3rd attack in that order .