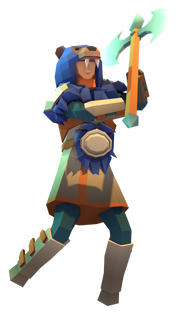 The Berserker may be the hardest class to play, but its strength lies in its flexibility. With both ranged and melee attacks, it is powerful, but hard to use. The Berserker's headshot can do 200 damage - the most damaging attack in the game. It can one-shot warriors with their shield down, and always one-shots other classes. However, it is very hard to hit with. My advice is to aim slightly higher than you would with a Hunter; half the circle above the head. For playing a more melee focused game, I advise you to use your leaping/slam attack heavily, and your ranged attack to break down a Warrior’s shield, before getting close by leaping over them and attacking from behind. For Hunters, there are two approaches you can take, either kill them at range, or chase them into a corner. When doing that, try to conserve your energy (Tip: Throwing your axe and not recalling it will make you run faster). Going against other Berserkers is truly a battle of sheer skill. Avoid facing other Berserkers in melee, instead, try to take them out from a distance.

Stealing gold is not the main ability of the Berserker. Gold will be easy to get, but hard to hold onto since this class is relatively slow and lacks a shield. With that said, getting kills is easier than other classes, which is why the Berserker is good on team mode. While playing on a team, protect the Warrior or Hunter that does have the gold and kill the enemies that have gold.