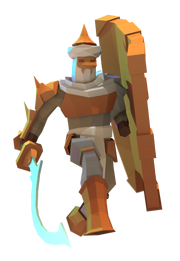 Having recently returned from foreign lands with newly acquired exotic skills ~ the mercenary Immortal Warriors are experts with curved swords, precise counters and a focused rage ~ through discipline their Mastery has granted them the Immortal Impact ability to reflect damage back at their aggressors.

On their journey through foreign lands, not everything was as it seems. Requiring more endurance to kill the oncoming hordes of enemies, their bodies enter a sort of rampage, or fury, after a kill. However, in addition to hordes, they did something called jousts. Chasing down your opponents on foot after the defeat of the horse, legs able to keep going even when all others would fail, their strong but lethal attacks are almost certain to reduce your foe to ashes in seconds.

Returning from the lands, they took to a ship with their newly acquired skills only to find they weren't done learning. Adopting a curved sword from the skirmishers on board the ship, they learned to kill and learn new weaknesses from each kill, increasing damage after every kill. Only when they truly returned to Arcadia, were their skills set in stone.