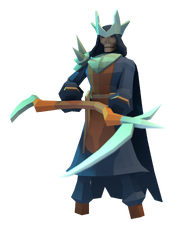 Blood the Grim Berserkers savored and students of the dark arts was their way ~ learned through sacrificial teachings they have attained new levels in the exploitation and torment of their enemies ~ with the truly darkest blood magic granting them Mastery of the Sanguine Strike and its life draining boon.

The Berserker stood back, alone among the others. He watched with sickening horror as the Wild Berserker, their chieftain, bled out on the floor. The crowd around him murmured as they watched the strongest fighter out of all of them die on the ground. The realization that this could happen to anyone hit him hard and fast. He staggered back, almost sick as he thought of what had happened. The Shadow Hunters had appeared out of nowhere, slinking through the back alleys of their village. Snow had already blinded their vision when the smoke seemingly teleported in front of them and the screams began. That night he ran over the frozen ground as he made his way to the nearest town. He seeked out the mages, and in the dead of night he snuck into their shop. He cut down their hired guard and he ran out with scrolls and potions. He began, night by night, to learn the magic language and the words of power that would help him on his mission. He practiced over and over again until he was certain it would work. He knew, in his heart of hearts that there would be another attack on his village. This time, he would be ready.

They never knew what hit them.

He jumped down from one of the roofs and cut down the Archers. They tried to flee, but he would suck their life out of them. They could not even scratch him, for he healed from the blows he struck.

He would throw his axe, spinning end over end as he cut down their brethren. The luckiest would hide and try to avoid it, but it would come right back and cut them down on the return. The next day, the town was free of Hunters and the graveyard was fresh.

The Grim Berserker smiled as his dark magic wreathed around his skull.

The Hunters did not return to the village for a long long time.