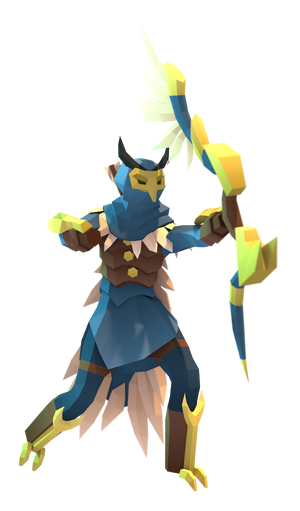 Ascendant Falcon Hunters of the light are well-versed in all aspects of combat ~ though favoring to hone their long range archery skills and far sight, with an unmatched affinity for heights ~ upon reaching Mastery they are seemingly able to defy gravity with the blessing of Falcon Flight.

Lurking far from the fields of combat, these Hunters excel at removing opponents from battlefields. Using ranged attack tactics instead of close up combat preferred by their Shadow counterparts, these Hunters treat their rare gift of flight more like an art then a combat technique.

It is said that these Hunters are raised on carrots, enhancing sight both by distance and perception while at the same time using bunnies to further boost health and skill. On consumption of their first bunny, these Hunters bodies change raising the height the jump and making it easier to jump. And yet, with all these boosts they still have an uncanny ability to take down weakened foes without batting an eye.